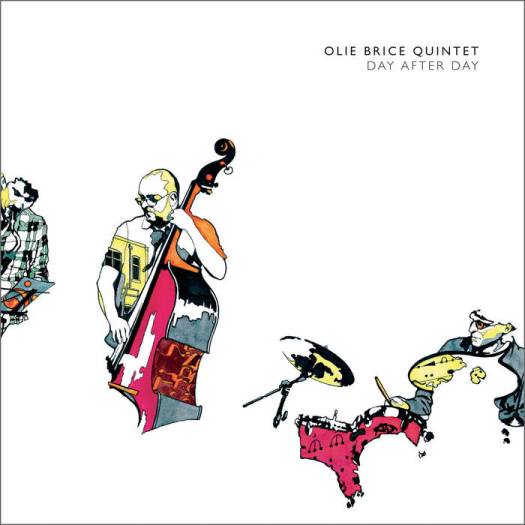 Very pleased to announce the latest album by the Olie Brice Quintet!  ‘Day after Day’ will be released on the Babel label on Friday 16th June, and launched this on the 14th June with a gig at the Vortex, London.

Featuring Alex Bonney (cornet), Mike Fletcher (alto), George Crowley (tenor) and Jeff Williams (drums), this is a follow-up to ‘Immune to Clockwork’.  Playing original by me, including dedications to Nathaniel Mackey and Wadada Leo Smith, and one very old standard.

I will of course be selling CDs at gigs, starting with the launch gig on Wednesday.  You can pre-order, download or stream the album here – https://babel-label.bandcamp.com/album/day-after-day

And here’s some footage of us playing one of the tunes, a couple of days before the album was recorded:

The fantastic alto player Dee Byrne has launched a kickstarter campaign to raise funds for Entropi’s debut album.  Entropi is Dee’s quintet, a band i love playing in.  Here’s the video – if you think you might buy the album when it comes out anyway, please consider pre-buying it now!

The new album by the Nick Malcolm Quartet will be out very soon, on Nick’s label Green Eyes Records.  The album is called ‘Beyond Our Voices’, and features the same line-up as our earlier album – Alexander Hawkins on piano, Mark Whitlam on drums and me – plus a very special guest Corey Mwamba.  I love being in this band, Nick writes fantastic and original music and I’m really proud of the new recording.

Here’s a recent interview Nick did about the release, along with a bit of footage of a gig we did at the Vortex earlier this year.

We’ll be touring to promote the new album, with Ric Yarborough replacing Mark Whitlam on drums for this tour.  The first four dates will be with Corey Mwamba on vibes, the next five Alexander Hawkins on piano, and finally Alex Roth will be on guitar for the final gig of the tour.

This is where/when you can catch us:

Here’s a couple of clips of BABs in Foligno, in january

there’s a bit of footage online from the Nick Malcolm Quartet tour, one here at the bebop club in Bristol (with the fantastic Corey Mwamba depping for Alexander Hawkins):

and another here, from Monmouth, playing Andrew Hill’s tune ‘Dusk’

The album has had a couple of nice reviews too, one here on Jazzmann, and one in jazzwise magazine, which isn’t online.

Edit: another review, on the LondonJazz blog: http://londonjazz.blogspot.co.uk/2012/09/cd-review-nick-malcolm-quartet-glimmers.html

Nick, Mark Sanders and I did a really nice recording session last week, beautifully captured as always by Alex Bonney.  Hopefully it’ll be an album at some point, details here as and when…

Nick and I also played Mopomoso at the weekend, John Russell’s monthly night at the Vortex.  Mark wasn’t available, but we played with the great Roger Turner instead, something I’ve wanted to do for ages.  here’s the evidence…

Looking forward to a tour starting this tuesday, with Mikolaj Trzaska on alto sax and clarinets, and Mark Sanders on drums.

Mikolaj is a fantastic player, works with the likes of Peter Brotzmann and Ken Vandermark.  Anyone reading this is bound to know Mark’s playing!  We did some playing as a quartet with Steve Swell (on trombone) about a year ago – which was great, so I’m sure we’ll have a lot of fun this time round.  Here’s the details:

Edit after the tour – We had a great time! There’s a nice review here:

and some footage here:

I had the huge joy and privilege of playing with the great Louis Moholo-Moholo a few weeks ago.  There’s a nice review and some footage here:

our duo album, ‘Brackish’, should be out any day now on FMR.  Details will of course be on here when its ready…