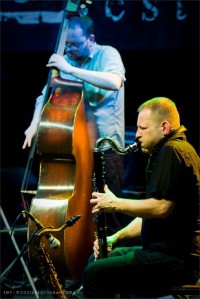 A few more reviews have come in for the Riverloam Trio LP.

Gapplegate Music Reviews had this to say:

“NoBusiness Records has been doing an excellent job exposing the world to important aspects of the American and International improvising avant garde. They have also, from their home base in Lithuania, been taking the opportunity to document and present Eastern European artists that we might not otherwise get the chance to hear.

Altoist-bass clarinetist Mikolaj Trzaska is one such artist. The recent double LP Riverloam Trio (NoBusiness NBLP 52/53) gives us a good listen to Mikolaj in a fine trio setting. Olie Brice on double bass and Mark Sanders on drums provide an excellent collaborative twosome for Trzaska’s reeds. They are free-wheeling and inventively varied, accomplished free improvisers. Trzaska has stylistic originality. He has a soulful rasp a la Threadgill and the ability to weave interesting lines with excellent consistency. He can soar in the clouds or whisper with the wind.

The double LP is a joy to hear. But keep in mind only 300 copies have been minted. So grab one now if you are inclined. It’s a great listen”.

Squidco.com describe it as “A powerful record that understand its roots”

Clifford Allen, writing in the the New York City Jazz Record says:  “Improvised music is truly a world music – that much has become clear over the last few decades. European and Asian musicians have long been as vital as their American counterparts, despite the occasional (and without merit) stateside protest that this music is on a path that rejects or sidesteps its AfroAmerican roots.  With the dissolution of the Eastern Bloc, artists from Poland and the former Czechoslovakia and Yugoslavia have furthered relationships with musicians throughout Europe and the US, making up for lost time as artists whose work was important on the nascent European jazz scene went practically unheard in the States.

Polish altoist and bass clarinetist Mikołaj Trzaska has, over the past two decades, become a leading light of the country’s improvised music scene and worked across geographic demarcations with such figures as Ken Vandermark, Joe McPhee, Lester Bowie, Peter Brötzmann, Johannes Bauer and Peter Uuskyla. Riverloam Trio finds Trzaska joined by the English rhythm section of bassist Olie Brice and drummer Mark Sanders on a program of five improvisations recorded in Birmingham, England in May 2011.

On “Ostrich Season” his dusky bass clarinet is given to dirt and elegance; Brice and Trzaska saw and ululate with Sanders accenting in flits and clatters.  Switching to alto, Trzaska’s tone is measured and dry but with a fullness of impact, each tonal construction hovering between brittleness and muscularity. There’s certainly a felt kinship with recent Brötzmann (with whom Sanders has collaborated), at least tonally, but Trzaska seems more coiled or controlled. The proceedings build to a hard charge, albeit briefly, and it’s clear that the reedman could resolutely peel the paint off the walls if and when necessary. “Carnival of Shapes” is similarly sparse but more agitated, Trzaska curling and cursing before his statements unfurl in hoarse wails and bitter conversational scraps. Riverloam Trio presents some of the finest Trzaska on record, not to mention the work of sympathetic and exciting collaborators”.